Faith, family and football give Daniel’s life meaning and joy

Eight years in the military and a veteran of the Iraqi war, in 2015 Daniel Williams, back in the U.S, knew he was in for the fight of his life. 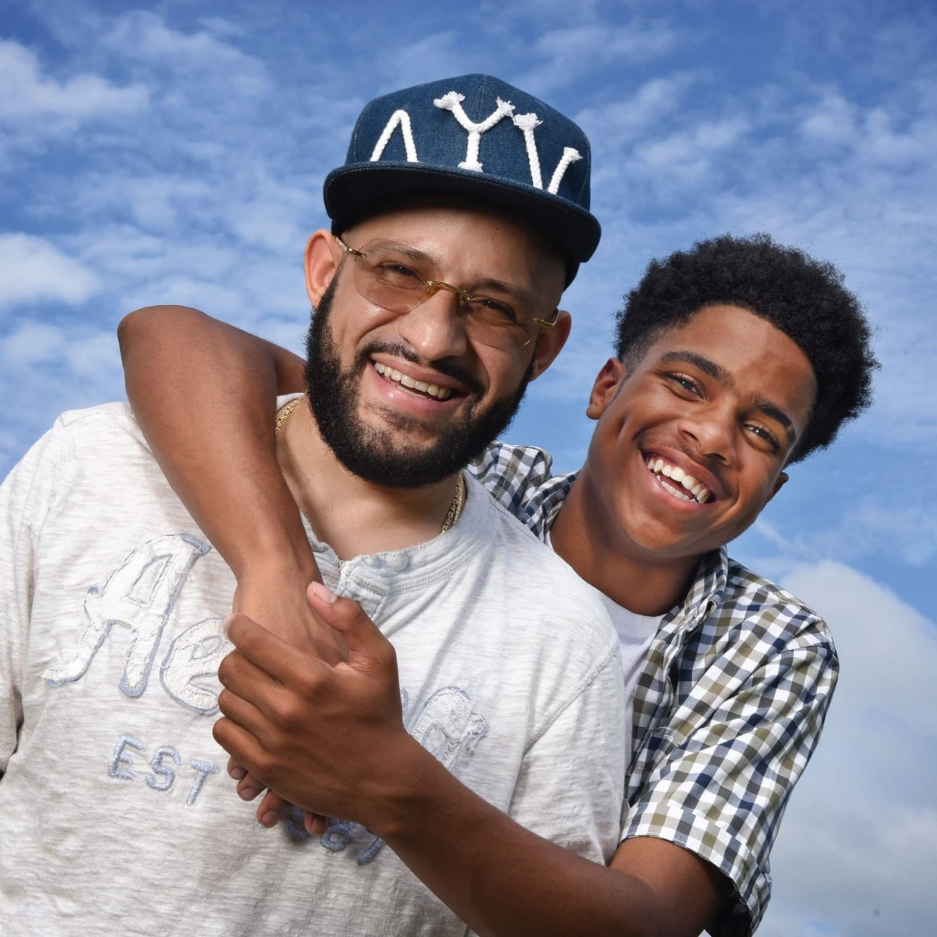 A diligent worker who put in 80 hours a week on the job, was running too fast to notice the deep exhaustion that had crept into his life while a pain in his back had grown excruciating. He thought he was just working too hard.

So he switched jobs to one with fewer hours. But eventually he had to quit that job, too.

Daniel’s wife, Kiaira, also a veteran and whom he met in the military, finally convinced him to go to his doctor where he was immediately admitted to the hospital. He was diagnosed with Acute Lymphoblastic Leukemia with a twist that doctors referred to as Ph+ALL – a rare subtype of his leukemia with a genetic mutation called the Philadelphia chromosome.

Kiaira’s urgency was divinely timed. At the hospital, doctors said that Daniel had from two days to two weeks to live. But he was a soldier and he would fight one hell of a battle instead -- one that started with rounds of chemo while a bone marrow transplant donor was sought.

But there was a catch. Daniel was adopted and had no blood relatives in his generation or older to test for compatibility. Daniel’s adoptive father even sought a court-appointed mediator to reach out to his birth parents. Disappointingly, they refused to be tested.

Kiaira to the rescue again began to explore the idea of one of their two young sons – Daniel Jr. or Nathan – serving as his donor.

But the notion of Involving his son in his survival was not a decision Daniel Sr. took lightly. He understood that having such a young child as a donor was rare and he knew there were no guarantees.

“I’m my son’s protector first,” he said. “My main concern was whether it would have any adverse effects on him and I was told there would be none.”

The doctors questioned whether Daniel Jr. could make a decision like that on his own. Daniel and Kiaira knew their son could.

Daniel becomes emotional, as he recalls it, as he reflects on his son’s decision.

Daniel Jr. was an in-patient at Children's Hospital of Seattle while he, Daniel Sr., was across town at the VA on speaker phone as attorneys and doctors explained to Daniel Jr. exactly what he would encounter during the procedure.

It was so much detailed information that young Daniel even left the room for a few minutes to collect himself.

When Daniel Jr. returned to the crowded room, his father heard him say this:

Meanwhile, Nathan, only eight-years-old at the time, was a hero, too, his father says.  Nathan kept the home fires burning, dealing with long periods staying put in Michigan while his family was in Seattle to do the job that needed doing there.  Everyone had a role.

Daniel Jr.’s bone marrow harvest ensued and his bone marrow was taxied over to his father who underwent the transplant. A week after surgery, Daniel Jr. had already bounced back and has been sprouting ever since. At age 15, and 6’1”, he’s taller than his father.

Daniel’s gratitude extends to Thomas Chauncey, MD, PhD, and his team at the VA. He appreciates his physician’s direct approach, and says that the team made it easy to be optimistic and positive.

“I trusted them. From the pharmacist to the nutritionist – everyone knew what they were doing.”

It did not escape this proud soldier’s notice that the VA took care of its own so capably.

And their care went way beyond medical skill.

Knowing Daniel was a huge sports fan and that his beloved Detroit Lions were coming to Seattle for Monday Night Football, the hospital staff wrote a letter to the Seattle Seahawks asking if the team could donate game tickets for Daniel. But the Seahawks went one better:  They invited Daniel to their suite for the game. Mask donned, precautions taken, Daniel had the time of his life.

Kiaira has returned to work and remains Daniel’s advocate. His diagnosis and transplant was a family affair and Daniel relishes time with his family above all, whether a son’s football game or hanging out.

“I appreciate the real things in life – my family, my wife and children. That’s where the rubber meets the road. That’s what brings me joy now and I just take it one day at a time.”

Daniel acknowledges that for someone who was used to being in charge, his diagnosis and transplant has been a humbling experience, one made easier by his philosophy that “you need to radically accept things the way they are.”

His faith provides him a roadmap for acceptance. He believes that his attitude is the only thing he can control and that faith in something contributes to a positive outcome.

“You can continue to drive in the passenger seat all you want, but if you give the driver’s seat to whomever or whatever you believe in – a higher power, the universe, or your doctor, and you let them drive, you can just recline in your seat and relax.  For me I put God in the driver’s seat.”