Big old bubble of joy describes Aanamyauri to a T.

Meet Aanamyauri, a miracle girl. Or, as her mom, Dashila, calls her, “a big old bubble of joy.” Aanamyauri swims like a mermaid, bikes her block fearlessly, and has a special song for every member of her family.
Though it’s invisible in her

pictures, this bundle of girl power and playful energy lives with an immune disorder that can send to her to sleep in tears from pain in her legs. Still, illness doesn’t define her; as Dashila says, “Almost every day, she wakes up smiling."

Even before Aanamyauri’s birth, her parents lived with an excruciating medical mystery– at seven months pregnant, Dashila had delivered a baby girl who lived only a few hours. Doctors were unable to offer Dashila and her fiancée, Antonio, a medical explanation for the loss of their daughter.

Several years later, when Dashila became pregnant once more, her jubilation was clouded by worry. And, sadly, worry was warranted. As an infant, Aanamyauri, struggled to fight chronic infections and suffered from persistent skin issues as her parents searched, in vain, for answers.

During one of the family’s many visits to their local hospital, a passing doctor happened to glance into their exam room. Earlier that day, this doctor had been on an hours-long conference call trying to gather information about an extremely rare disease. The doctor, struck by the silvery cast of Aanamyauri’s hair, stepped into their room uninvited to ask, “Where did that hair come from?”

Though at first put off -- “I was ready to kick him out,” Dashila recalls -- she and Antonio quickly realized this doctor recognized something in their daughter that no other doctor had. 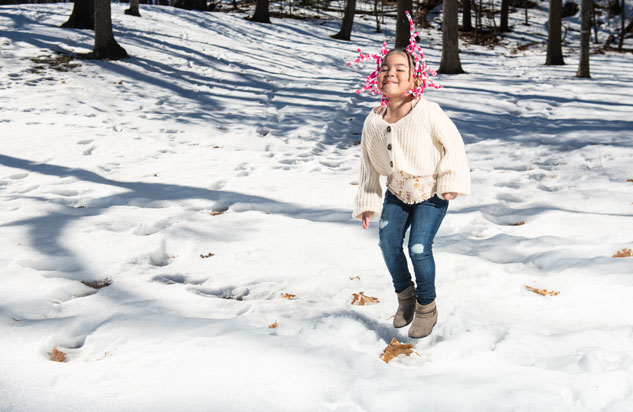 At the doctor’s suggestion, Dashila and Antonio underwent genetic testing for Chediak-Higashi syndrome, a rare disorder that attacks the immune system and is characterized by albinism (hence silvery hair). For patients with Chediak-Higashi syndrome, even a common cold can be life threatening. When results confirmed that both parents carried the gene, as scary as this final diagnosis was, it also opened a portal of hope – bone marrow transplant.

Doctors then tested Aanamyauri’s father, mother and sister hoping to find a “full match” donor. Unfortunately, the closest they came was a “partial match,” in Dashila, who leapt at the opportunity to offer her daughter concrete help. Dashila recalls, “They sat me down and explained that if they took twice the usual amount (of marrow) from me, it could save her. Of course I said yes.”

On January 22nd, 2018, two days after her 1st birthday, Aanamyauri received her mother’s life-saving cells. Now more than two years post-transplant, Aanamyauri is a healthy, effervescent four-and-a-half-year-old, even as she lives with some residual issues. Dashila explains, “I wouldn’t say her immune system is strong, but it can fight! If you look at her, you’d never know she was sick.”

When asked what other families might learn from theirs, Dashila responded instantly, “There are millions of diseases that people have no clue about… We want the world to be aware of the importance of genetic testing.” Hearing this, Aanamyauri asked who Dashila was talking to, “Is that my teacher or my doctor?”

Dashila replied, “This is someone who’s going to write a story about you. What do you want your story to say?” Aanamyauri’s answer came as quickly and instinctively as her mom’s, “That I love my family.”

The American Society for Transplantation and Cellular Therapy (ASTCT), formerly known as the American Society for Blood and Marrow Transplantation, is a professional society of more than 2,200 healthcare professionals and scientists from over 45 countries who are dedicated to improving the application and success of blood and marrow transplantation and related cellular therapies. ASTCT strives to be the leading organization promoting research, education and clinical practice to deliver the best, comprehensive patient care.