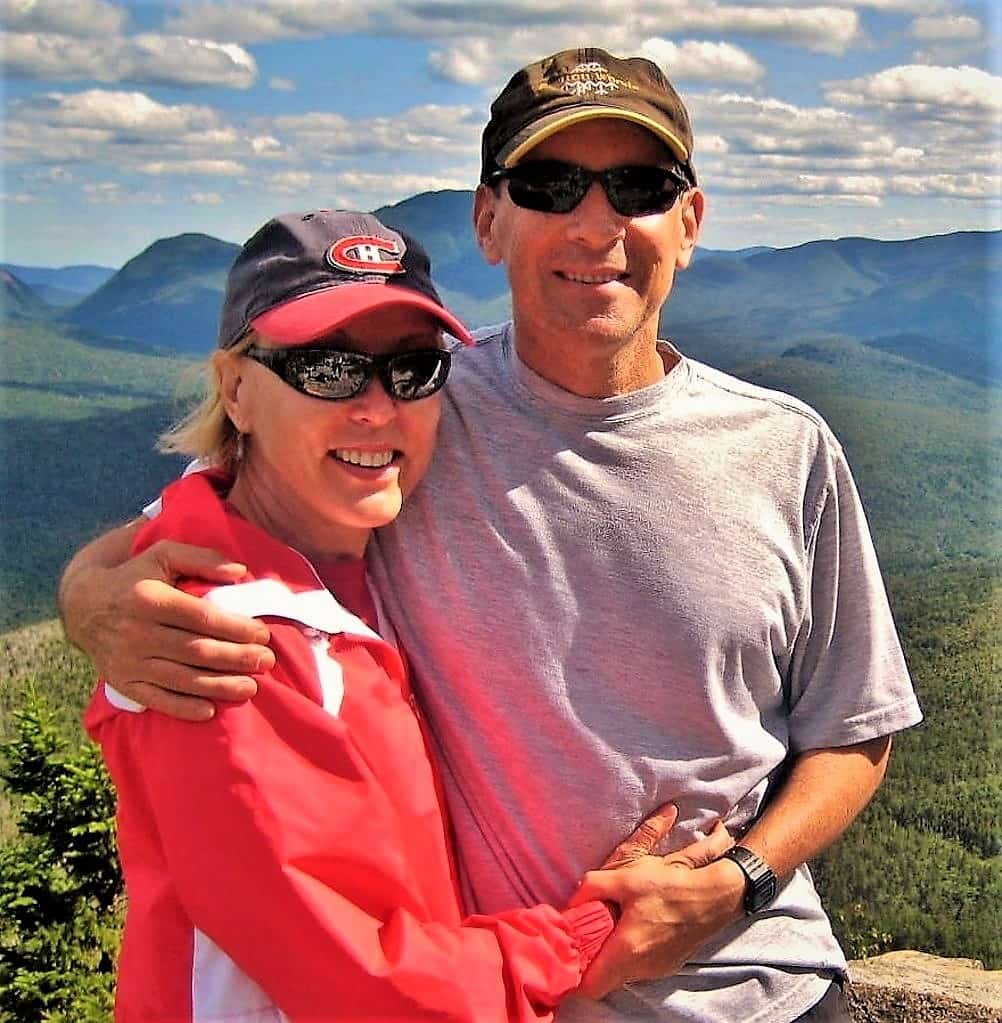 Peter Gordon has always been the guy who thrives with purpose.  He’s the man in the room who sets goals for himself and meets them.  Whether committing to climb all 48 “4,000-footer” peaks in his state or finding himself a partner, his goals give him direction and motivation.

Never have those skills been put to better test than when Peter was faced with what few have to face: leukemia and bone marrow transplant while nurturing a new marriage, caregiving while receiving care, and refashioning a meaningful life given his new circumstances.

Back in 2005, Peter was newly divorced and living in the mountains of New Hampshire (with 48 high peaks!) and working as a weekend ski instructor while traveling for his corporate training career.  He was an avid outdoor adventurer who loved everything from biking and hiking to canoeing and mountain climbing.  He watched what he ate and lived a healthy lifestyle.

He met his match, Mary Ann, online, and after courting long distance, she moved in with him.  Both were active and fit nature lovers.  Whether discussing history, sharing books, or hiking in the mountains, they got along famously.  And after a while they decided to set their hiking boots and backpacks side-by-side and get married.

Soon after, during a routine physical, Peter’s blood work raised a red flag.

The diagnosis?  An aggressive form of acute myelogenous leukemia (AML).

Peter received his first dose of palliative chemo…his “waiting” chemo… while a donor was sought for the transplant he needed.  It happened to be on the couple’s first wedding anniversary.

Those several months of waiting were excruciating, Peter says, made harder by the news that the bone marrow he needed had to be not only from someone Jewish but a smaller subset called Ashkenazi Jews.

“The anxiety of just waiting and not knowing was more stressful than any other part of the actual disease,” says Peter.

Out of this brought a new cause for Peter: helping people understand the great need that exists for donors, and encouraging them to sign up with bone marrow registries.

During all of it, Mary Ann was Peter’s confidante and caregiver.  A problem solver and voracious reader, Mary Ann sought guidance in books to learn how others handled the rigors of leukemia and bone marrow transplant.  What she discovered was that she could not lay her hands on an account that really spoke to their story.

They decided that they needed to explore their own path, one that worked for them and would help others at the same time.  They noted that many cancer patients found solace in organized religion, but that was not who they were.  Focusing on the present, rather than thinking about the future, was a source of their equanimity. One important way Mary Ann and Peter managed the peaks and valleys was with a shared offbeat sense of humor.

“Humor, for us, was a potent medicine,” says Mary Ann. It continued to be a balm during Peter’s month-long hospital stay after a donor was found.

As she was caring for Peter when he was recovering at home after his transplant, Mary Ann took a serious fall on an icy path.  She shattered her ankle and her knee.  Hers were complex injuries, and surgery after surgery ensued.  With each new operation, Mary Ann’s condition seemed to grow worse.  It was not even clear whether she would ever walk unassisted again.

Peter tenderly cared for Mary Ann as she spent the next year and a half on crutches, while he struggled with his own post-transplant health.  In the years after Peter’s transplant there were other challenges for the couple, too, like post-recession career struggles and post-transplant side effects.

And they were both acutely aware of the high divorce rate for couples whose picture was like theirs.  With this in mind, they worked hard to keep their bond solid.

Out of these challenges, a goal emerged.  That book that Mary Ann was searching for?  Peter decided to write it.

The next few years of working on the book allowed Peter the purpose that always fired him up.  Equally important, it provided both Peter and Mary Ann the opportunity to reflect and consider lessons learned during their journey with cancer.

For Peter the storyteller, the book was his path to educate, support and inspire patients, caregivers, and, not least – medical providers.  Lessons, observations, and doctoring – best practices and not – abound in the book.*

These days, Mary Ann and Peter have traded the peaks of New Hampshire for the shoreline of Maine.  Peter is back to work, and now also travels around the country giving presentations to patients, hospitals, and cancer groups.

Mary Ann often joins Peter on these talks to offer the perspective of the often-overlooked role of the caregiver, and to share coping tips for cancer couples.  They’re passionate about spreading the word about what they found to be most life sustaining.

Peter and Mary Ann believe that healing incorporates more than medical treatment, and have coined the phrase “many medicines besides drugs” to describe the helpful tips and strategies they have learned.  Here are a few that they recommend:

Reaching out and supporting other cancer survivors has reminded Peter that his life is enriched when he works toward a purpose.

“There’s an old saying up here along the Maine coast that a boat deteriorates much faster when it sits idle in the harbor than when it’s out in the open sea. There’s a time for rest but there’s also danger in idleness,” he says.

And it is worth taking note from Peter Gordon. He’s the antithesis of idle and better every day for it.

* Peter Gordon’s book, Six Years and Counting: Love, Leukemia, and the Long Road Onward, can be purchased on Kindle or in paperback on Amazon.