When Barry learned he had myelofibrosis, his wife Hope became his researcher-in-chief. 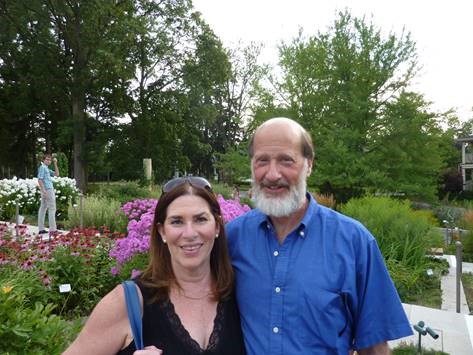 Hope Blitstien and Barry Kellman met in study hall their freshman year of high school.  At 22, they married – in sickness and in health.

Hope always thought that she'd have the bumpier ride when it came to health.  Her mother had had polio before she was born and her family had a history of early onset heart disease that was passed onto her, requiring a bypass at 46.

But Barry was invincible.  His parents had been healthy into their 90s.  He was going to live forever.

And then, just one day before his 60th birthday, Barry received a confounding diagnosis:  myelofibrosis – a bone marrow disorder that disrupts the body's normal production of blood cells.

Barry wished he could ignore the diagnosis and maintain life the way it had always been.  "But some things are unignorable," he says.

A dedicated law professor, Barry wanted to keep teaching and writing, and reading what he always had read – not about blood cells.

"Everyone handles these things in their own way and I needed to distance myself from what was going on," says Barry. "So I offered just the body that people would work on."

Hope, on the other hand, had to do something. "I couldn't imagine not making it together," she says,

So Hope and Barry Kellman embarked on this twist in their lives with a division of labor – Hope as lead researcher and Barry as patient.  After nearly 50 years together, they knew something about teamwork.

Hope understood that Barry wanted to maintain consistency in his life but she had a whole new world to conquer.  As she started to do her research, sometimes she’d sneak out of the house to do it. "I'd say I was going out to do errands because I wanted to stress about it all by myself, without Barry seeing it," she says.

At first, her main question was this:  What kinds of medications could she find that would forestall transplant?

"But it kept coming up that transplant was the only thing that could provide an absolute cure," Hope says.

Hope had to become familiar enough with his diagnosis to be able to ask good questions.  She read everything.  Some of it scared her.  Often it confused her.

"The medical world is not our world," Hope says.

So she started talking to everyone.  She got pieces of information from many sources, but did not know the significance of the pieces she was given, like the meaning of the rankings of hospitals.  She didn't know that expertise in one kind of transplant did not mean expertise in another kind.  "Kidneys are different than stem cells," she says.

"BMT InfoNet has so much information to offer.  I read the website from beginning to end.  Sue Stewart, the executive director, became our interpreter.  She was incredibly helpful about sorting out all the factors that needed to be judged in order to make this decision about whether to do a transplant and where it was best for us to go."

Barry ended up receiving a stem cell transplant from an unrelated donor in February 2016 at Froedtert Hospital in Milwaukee.  After exhaustive research and many visits and calls to other hospitals, Froedtert ended up being the place that best served the family’s needs.

"We could not have waded through this without BMT InfoNet," Hope says.  "It was the best decision our family ever made.  In the end you make that decision alone.  But this organization was a rich source of information and support so we could make it."

"One of the greatest challenges during the decision-making process is ambivalence – should I or shouldn't I," says Barry.  "It's okay for a while but at some point you have to get on the plane, strap yourself in, and believe you'll get to your destination."

These days, Barry teaches and writes and reads the kinds of books and articles he has always read.  He has just received the green light to travel, another marker of life back to normal.  To celebrate, he and Hope are taking to the open roads in Wales, to snap pictures and look at gargoyles.

"To a large extent, I've put the diagnosis and transplant into my rearview mirror," says Barry.

"The whole thing was scary as all get up," says Hope.  "But I am an absolute believer in the process and the incredible people who do this work.  It calmed my savage nerves."

1.  Read current articles.  Don't read old stuff.  It only scares you.  If anything old is still important, it's reiterated in newer articles.

2.  Talk to lots of people.  Websites and offhand conversations can lead you to great people to talk to.  A friend in the medical field on the business side led us to information that began to clarify things for us. Another website led us to BMT InfoNet and Sue Stewart. Talk helps with small things and big.  When you're scared, the obvious isn't always obvious.

3.  In choosing a facility there's much more to know than how it's ranked.  There are other important things like whether the doctor has done not just transplants, but the kind of transplant that you need.  There’s location. There’s the support staff.  Considering the pre-transplant protocol should also be part of your consideration in choosing.