Battling Hodgkin disease and graft-versus-host disease hasn't been easy, but Matt has it under control. 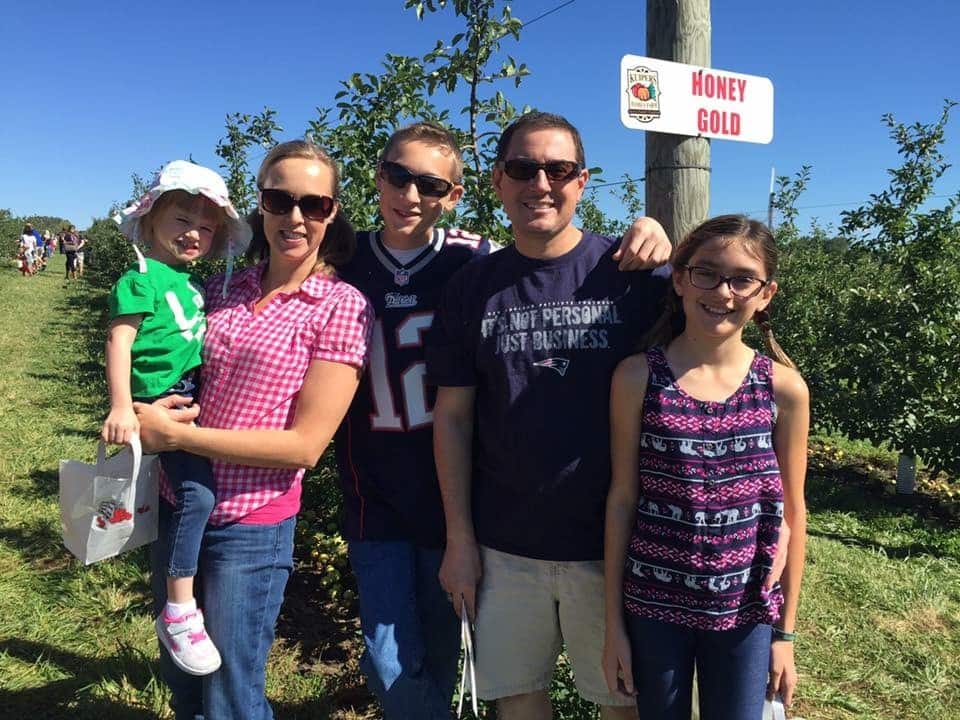 On the morning of January 30th, 2013, Matt Robbie and his wife Coleen were headed to the hospital to greet child number three.  They agreed that the only interruption they'd allow would be a call from Matt's doctor who was scheduled to check in later to tell Matt whether the chronic cough he had had for five weeks was pneumonia.

As Coleen and Matt waited in labor and delivery for her Caesarean section to begin, Matt stepped out to take the call when it came.  Coleen waited impatiently for Matt to hear the news.

Not pneumonia, tests indicated that Matt had cancer.  With that news hanging between them, Coleen delivered their third child.

Matt's diagnosis 22 days later was Hodgkin Lymphoma Stage 2B.  He was 36 years old.  He had three kids and a wife, and a tough family history:  a brother very sick with muscular dystrophy who later died in 2014, and a dad who had died of cancer at 33.

But Matt and Coleen were a team.  Matt was going to live and Coleen was going to make sure of it.  "I fought really hard because I could not leave my kids," Matt said. "Coleen was my caregiver and researcher.  She saved my life."

The Robbie family went into a new phase of their lives, that Matt characterizes as him as sick person and Coleen as caregiver.  He started with traditional treatments and when they failed to put him into remission, Coleen kicked into even higher gear.  In a Facebook support group, she found a promising-sounding program at New York-Presbyterian.  Matt became a patient and two years after his diagnosis, on the date of his own father's death, Matt underwent what he calls his rebirthday -- a transplant with stem cells from an unrelated donor in Germany.

After 100 days in isolation because of the vulnerability of his immune system, he was pronounced NED -- no evidence of disease.

Victorious and thrilled, Matt also felt confused when he reached this milestone.  The prior two phases in his family journey had been clear cut.  In the first, Coleen was a stay-at-home mom and he was the sole breadwinner.  In the second, he was the patient and Coleen was caregiver.  Those were straightforward.

This, being pronounced healthy after four years of illness, was an entirely new thing.  Matt calls it their Now What phase?  They were neither the people they were when they first married and had kids, nor were they focused on the patient with an acute disease.  They began to have to integrate all that had happened and go into an entirely unexplored place.

For Coleen, this has meant taking what she learned while caring for Matt and turning it into a new profession as a nurse.

For Matt, it means a new view of a life he didn't anticipate.  There are rewards, starting with new wisdom and deep appreciation for the gift of his life.  And there are hurdles, like navigating the after effects of lymphoma and the adaptations the body needs to make after receiving another's stem cells.

Matt has had to contend with graft versus host disease (GVHD) a condition where transplanted immune cells attack normal cells.  GVHD can express itself with a wide range of symptoms and can affect many different parts of the body.  In Matt's case, GVHD  affected his gut, then his skin and his eyes.  He has learned to manage each of these, including the chronic dry mouth that has him constantly sucking on hard candies.

His first bout of GVHD was acute in his gut, and landed him back in the hospital. He had to be extremely careful with his diet for a year, as he adjuted to his new immune system.  That has passed.

About his skin GVHD, Matt says that though it can be a nuisance, he's armed with a topical steroid that's at his disposal when he has an outbreak.

About his eyes, he says that they are most affected during the evening, and for them, he uses drops.

"After transplant, you're often challenged by physiological changes and the need to know what's okay and what's not," Matt says.  "But then you begin to understand what everything means and what you need to do, whether adapt your lifestyle or reach out to someone on your team."

He has a specialist for each of his areas affected and his transplant physician, who invites him to text, email, or call when he has a question.  Find a doctor you trust, is his motto.

These days, Matt is enjoying life.  "It was important to me to adapt my lifestyle to the situation, so my symptoms, which can be inconvenient, don't control my life."

Next Page: Barry and Hope's Story