Social butterfly Mistha is a big sister and a powerhouse at four.

Picture a bubbly, pig-tailed four-year-old cutie in a twirly dress dancing in front of a mirror.

This is Mistha the Joyful. But there were darker times, too. 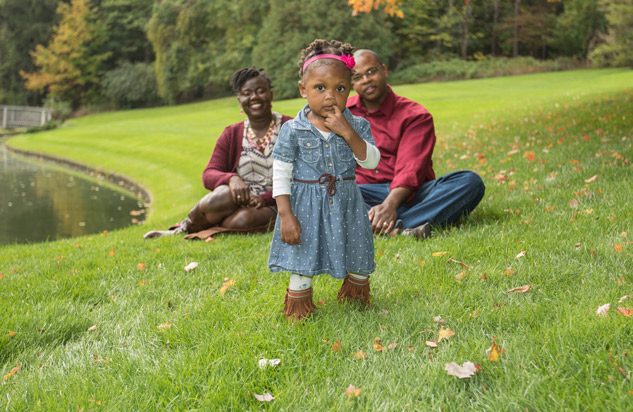 (Spoiler alert: this princess story has a dance-worthy ending.)

The first child of Widline and Julius Jackson, Mistha was born into a closely-bonded community of family and friends.

A scant six weeks after birth, this little one spiked a fever and was alternatively vomiting and gasping for air, causing her parents to rush her to the emergency room. For Widline, “the world was spinning” and it was nearly impossible to take in the diagnosis: a life-threatening, inherited overactive immune system problem called HLH, short for hemophagocytic lymphohistiocytosis.

It was later learned that both parents, one from a Haitian background and the other African American, carry the same mutated gene.

Chemo was given to Mistha over the next four weeks in the hospital, and then as an outpatient when she went home. Widline witnessed her beautiful baby deteriorate. Mistha was so lethargic that she no longer had the energy to nurse; she was given a feeding tube. The hospital was hitting her disease, initially thought to be leukemia, with its full arsenal of antibiotics as a steep learning curve was navigated to counter this rare disease.

When the doctor changed Mistha’s meds to trial meds obtained from Switzerland, her daughter returned, bright-eyed and laughing.

During this time, Widline and Julius were struggling to keep their spirits up. To conserve finances, the couple decided to sell their apartment and make the hospital their temporary home. Julius picked up a second job.

In March of 2016 a bone marrow donor was sought to replace Mistha’s compromised immune system. A blood drive was set up in the Jackson’s church and two other churches; they needed to throw out a wide net as their different ethnic backgrounds made it difficult to find a match.

They also went through the bone marrow registry, which proved to be a heartbreaking experience. In short order, the family came to realize that African Americans, other minorities and people of color were not well represented as donors.

Call it a plea, a rallying cry or a public service announcement, Widline wants to spread the word about the need to get a more diverse population to register as bone marrow donors. Her message is straightforward: “You don’t want to be the one looking for a donor and not finding a match. And if you do register, please follow through.”

Widline relates that they found five people who were a match who didn’t follow through, either by not showing up for the next phase or failing to keep their contact information current. Her anguish is palpable: “I felt like people were holding my baby’s life in their hands and chose not to help. It still brings tears to my eyes.”

Each parent was a 50% match. Widline was the better donor candidate so she donated her marrow to her child.

Widline found the bone marrow extraction less painful than she expected. She was up and walking twenty minutes after regaining consciousness from the anesthesia.

It was the same for Mishta.  Widline watched as her daughter played and laughed in her crib as she received her mom’s bone marrow via IV tube.

Mistha had a mild case of graft-versus-host disease which has been held at bay. And finally, after pulling out her gastric tube numerous times, the G-tube was removed and she ate solid food.

When Mistha was released from her isolation room in the hospital, it was necessary for her to remain in a sterile environment. House hunting was added to the family’s to-do list.  Widline was vigilant in keeping the house clean; floors were washed and surfaces disinfected regularly.

During this time, Widline found that the isolation created loneliness. She was anxious to be around others and found the Healing Center in the Jackson’s hometown, a place designed for kids with autoimmune issues. There, Widline could socialize with other mothers and gain respite from the constant worry about germs. It was there that she discovered her daughter was a “social butterfly” who thrives around other kids. It wasn’t until Mistha was two that she could be presented to the church that had been a mainstay of support for the family.

The cognitive or physical delays that had been feared did not happen. Only Mistha’s height gives away her illness. The family has decided to go through a bone lengthening process to get her some height in the not too distant future.

Widline’s words to describe her now four-year old “miracle baby” come tumbling out: she’s a “big personality” with an infectious laugh, an independent spirit who is full of energy and “too smart for her own good.” Mistha is now an adoring older sister to her three-month old brother Everett. She’s a four-year-old on a mission: to spread the joy of living.